The New Normal: A Primer on Liquidation Preferences – Part III: Room for Compromise?

Signup for the
WTN Newsletter!

07 May The New Normal: A Primer on Liquidation Preferences – Part III: Room for Compromise?

Per the previous blogs, liquidation preferences allocate the proceeds of a liquidation or sale of a startup among the investors holding preferred stock and the holders of common stock. The operative principle is that the investors should get their respective invested capital back before payments are made to the holders of common stock. The last money in, first money out principle.

The last money in, first money out principle manifests in two takes on liquidation preference formulations. Entrepreneurs favor “non-participating” preferred, where, upon the receipt of exit proceeds, investors are given a choice. They can (in order of seniority: the “waterfall”) either take their preference up to the total amount they invested or they can convert their preferred to common and share, pro rata with the other common holders, in the distribution of the exit proceeds.

Investors prefer “participating” preferred, where exit proceeds are paid out investors up to the point where the investor has received back the total of its investment and if after such payments there is anything left the investors also share in those remaining proceeds with the common, as if their preferred shares had converted to common.

In recent years, entrepreneurs have been winning the preference negotiation, as they typically do when the venture investment business is soaring. It’s an argument that history suggests they are going to start losing as the venture industry falls to earth in the wake of the COVID-19 pandemic. For entrepreneurs, it’s time to start thinking about how to push back when investors start talking participating preferred.

Key to finding the middle ground in the non-participation/participation negotiation is remembering that the debate itself is over middle ground exits: so-called “sideways” exits. As discussed in the  prior blogs, participation has its most significant impact on entrepreneur and investor alike in deals where the exit proceeds are say 2x, or 3x, or even 4x the amount of risk capital at the table. As the return multiple goes higher, the absolute dollar cost (to the entrepreneur) and benefit (to the investor) of participation is constant, but as a share of total distributions it diminishes.

The easiest way to think about “participation with a cap” as “non-participating preferred with a bonus.” The bonus is, ironically, the cap.

Back to Fact pattern 1 from parts I and II of this blog series. VC1 has invested $1 million for a 1/3 equity stake in Newco. With non-participating preferred, if there is an exit VC1 can choose to receive either $1 million or convert to common and get its pro rata share (1/3) of the exit proceeds. Up to $3 million of exit proceeds, VC1 will always take the former, and above $3 million it will always take the later.

Now, put a 2x cap on the preference. VC1 now has a choice. It can either (i) take its preference, which would be $1 million plus participation until such point as it has received a total of $2 million, or (ii) convert to common and share the entire exit proceeds with common pro rata.

And so, the flaw in participation with a cap: there is a “zone of indifference” in exit proceeds where VC1 is indifferent between any range of exit proceeds. In our example, once a potential deal gets to a $4 million exit proceeds level, VC1 has no incentive to negotiate for a better exit deal unless and to the extent it believes it could get to an exit above $6 million. 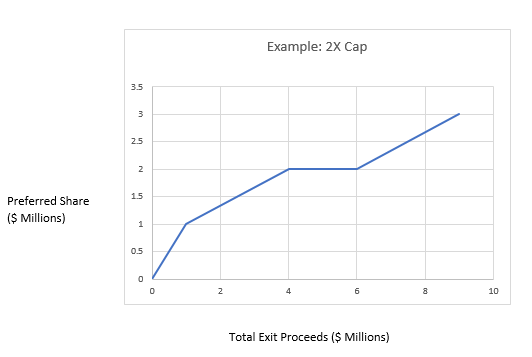 Second, a savvy buyer in an exit transaction will know what the zone of indifference is, and, if it’s in the ballpark of the exit transaction price will try to exploit it in the negotiations. How? By leveraging the investor’s indifference between the full range of purchase prices in the zone of indifference. So, in our example, if the range of purchase prices that the buyer has in mind is $4-6 million, it will likely push the investors hard for a quick, easy deal at $4 million, knowing that the prospects of a quick easy deal at $4 million are all the more enticing when the investor has nothing to gain by a price as much as 50 percent higher ($6 million).

While not as certain as death and taxes, the reemergence of participating preferred stock is pretty much a given when the venture capital market cools. While there is a lot of uncertainty how long and far the temperature will fall in the wake of the COVID-19 pandemic, entrepreneurs should study up on liquidation preferences before the chill sets in. Putting a cap on a double-dipping investor might seem like a small and imperfect consolation, but when times are tough even minor victories can provide some comfort, even if cold. And even recognizing that they can, in some circumstances, come back and take their own bite out of the common shareholder pie.